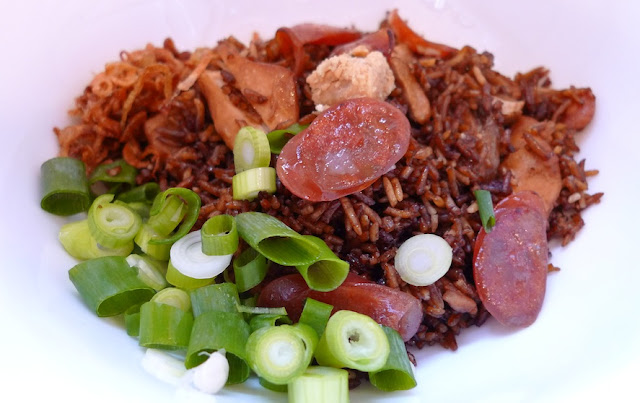 Very sorry about not posting in the last few weeks. The internet at my place STILL hasn't been restored and it is getting quite inconvenient. I am in internet and 'flogging' (food blogging) withdrawal, so I am posting this even though it's not going to be a very long one.

I've written about making 'Claypot' Chicken Rice once before, but the photo in that post was awful and the recipe was basic. I've taken it up a notch here and the little extras are definitely worth it. This is one of those really easy recipes that will produce a delicious, comforting, and incredibly satisfying, one-pot meal. Great for all you hungry, non-cooks like me.

I use thigh fillets because:
1. they contain more fat than breast fillets and are therefore far less fibrous and more moist.
2. the fat flavours the rice well, and
3. I am too lazy to deal with chicken pieces even though they would retain more flavour and moisture with the skin on and bone in, AND the fat from the skin would give the dish extra flavour (maybe one day, when I have my dream kitchen - I know, I know, what does a 'non-cook' want with a dream kitchen? Doesn't matter, I still do!).

Method
1. Steam chinese sausages (as per instructions on packet), then slice (about half a cm thick) and saute in a dry pan until slightly browned and oil is released into pan.
2. Set aside chinese sausage slices and using the same pan, heat cooking oil (estimate what you would need to coat all the rice you are going to use and add an extra tablespoon) and saute a large (about 2-3 inches) piece of ginger until slightly golden.
3. Add uncooked rice, saute until translucent, then set aside (with ginger) in rice cooker pot.
4. Heat some oil and saute garlic cloves (crushed with the side of a knife, but otherwise in one piece) until fragrant.
5. Add chicken pieces and fry until golden brown.
6. Add dark soy sauce and sugar to taste and stir fry well.
7. Add water to the chicken (estimate the amount you would need to cook the rice in a rice cooker, if unsure, use less and add more later).
8. Taste - sauce/broth should be just a bit too salty because the flavours will mellow considerably when cooked with the rice.
9. Pour chicken and sauce/broth over the rice in the rice cooker pot and throw in the chinese sausage slices.
10. Cook in rice cooker as you would cook plain rice. The switch will 'trip' and show that it is done before it actually is but leave it in to continue cooking. Just keep testing the rice to see if it needs more water or if it just needs to be left in longer.
11. While it is cooking, finely slice shallots and chop spring onions.
12. Fry sliced shallots until golden brown.
13. Serve topped with the fried shallots, chopped spring onions and some salted fish.
Posted by t at 5:38 PM

wah lau !!! like original wei! when can i try leh ? when u come back msia we have a makan session at ur home can ? hehehe :P

Nice! Looking forward to trying this at home!