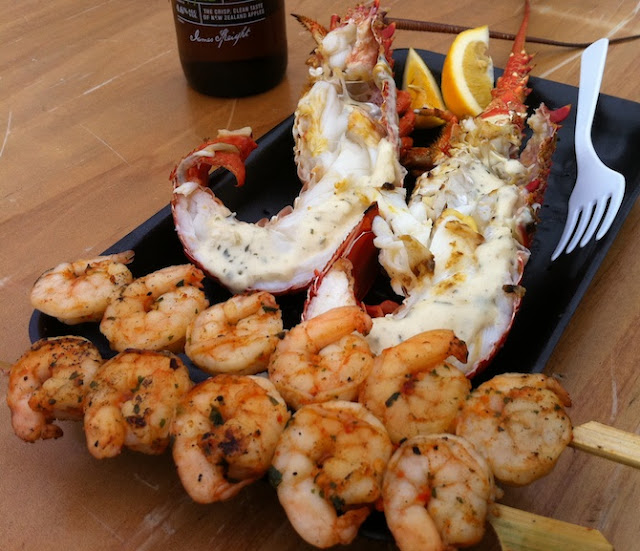 It was a mild day - perfect food-festival weather. As S and I made our way to the Port Chalmers Seafood Festival that Saturday, I had my doubts about how enjoyable the event was going to be. My prejudice was based on my experience at a very popular annual food festival that several of us travelled a few hours south for a few months ago. Certain key aspects of that event, in my opinion, were poorly conceived and could have been organised better. These failures became especially apparent in my mind when we saw how well organised the Port Chalmers Seafood Festival was, and what a difference it had on my perception and feeling of what were two almost conceptually identical events.

So before I talk about the food, let me pay my compliments to the organisers again (already did once before on their Facebook page). Despite being aware of the various modes of free transportation that had been arranged for ticket holders, S and I decided not to be green (naughty!) and drove there. As soon as we arrived in Port Chalmers, there were clearly visible volunteers in bright red t-shirts directing people to available car parks. They had maps of the neighbourhood and told us exactly where to go and where there would be plenty of parking. From there, it was just a short walk through town to the venue, which was easy to find as there were volunteers stationed along the route as well as arrows/footprints to follow on the sidewalk.

We go there at about noon, which is when one would expect it to be at its busiest. There were a lot of people (reportedly about 6500), yet unlike in festivals before, we never felt overcrowded or swamped. There was plenty of room for people to move about reasonably freely and the place was set up so that traffic could flow through the shed, outdoors and out of the venue without any congestion. That for me, was the difference between being uncomfortable and wanting to just get through it and leave, and leisurely trying all the different things on offer and just sitting down and enjoying the good food. The volunteers who were continually cleaning up and ensuring that the venue was always tidy were great and definitely deserve to be mentioned. I was also delightfully surprised to find that the portable sinks provided provided lovely warm water. It was very pleasant not to be shocked with icy cold water when attempting to wash one's hands, which is what I've come to expect at these types of events. The only significant oversight was the lack of overhead signage for each stall. Unless you asked for one of the venue maps at the entrance, which were strangely not automatically offered, you would not have been able to tell what each stall offered at a glance as most of the signs and prices were at table level or below and there were always people standing in front of stalls, blocking the signs.

First we had the Thai fish cakes in a steamed bun - the fish cakes were OK but the steamed bun was completely unnecessary and smothered the flavour of the fish cakes. Right next to the fish cakes stall, there was a very long queue, which we eventually discovered was for Harbour Fish's crayfish and other fares, so we quickly became part of that queue. Fifteen minutes later, we had a couple of skewers of grilled prawns, a whitebait patty sandwich and two crayfish halves and found ourselves a corner to nosh our nosh. The whitebait sandwich was bland but the grilled prawns and the crayfish were absolutely delicious! So delicious that we ended the day with ANOTHER two skewers of tasty, tasty grilled prawns and 2 crayfish halves, EACH. They were easily the best crayfish that I've ever had - succulent, firm, delectable chunks of sweet flesh, topped with a little creamy sauce. Bliss!

In between our two visits to the Harbour Fish stall, we thought that the long queue for the seafood paella was indicative of something good. It was not. It was actually one of the worst dishes I've ever tasted. Seriously. I paid $10 for a tiny scoop of rice and a few bits of seafood, then we each had one bite and threw it away. Luckily after that we had some pretty good donuts and bacon wrapped mussels from Top Nosh, and of course finished off with those lip-smackin', finger lickin' crayfishes and prawns.

All in all it was a fantastic afternoon and we enjoyed ourselves thoroughly. Everyone behaved very well, except for those idiots who smirked at of those of us who were queueing up properly for the crayfish and proudly told the people in front of us, "Are you guys seriously lining up? We just went straight to the front and got what we wanted". Pathetic. And those who followed their example were even worse. Have some dignity for goodness sake. We all got our food after a few minutes anyway.