10:47am, Sat 15 Dec 2012, Edit: I returned to Auckland and found it, thanks to A! She drove me up and down Dominion Road until I spotted it. And many before me have written about it so it must be an Auckland institution. Alas, we found it on my last day there, they were closed and we'd already eaten, but at least now I know where to go next time:

OK this is a bit of a cop out because I am on holiday, but that's what holidays are for. Sorry photos are not very good. It was late. 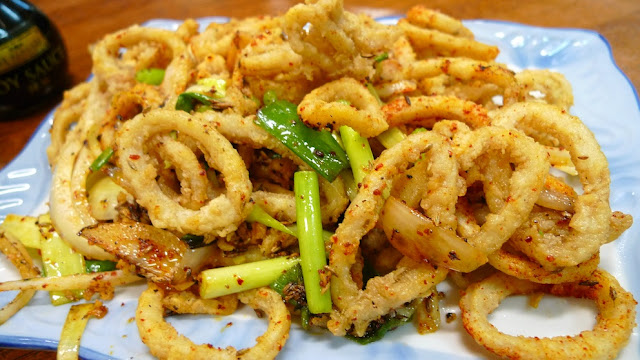 We had these dumplings and this excellent fried squid in August 2011 in Auckland. Unfortunately, none of us can remember the name of the restaurant or the address, except that it's on Dominion Road (I've even tried Google Maps' 'Street View', etc). The front of the shop is glass and has red chinese characters and the word 'dumplings' all over it. We had actually (literally) just eaten at another restaurant in the vicinity (upstairs, several shops away) that A took us to for the Chinese-style skewered, barbecued meat, but for whatever reason, this place just looked like it would serve really authentic dumplings, and so, was irresistible (if any of you know this dumpling place that I am referring to, please let me know). A, who picked us up from the airport and drove us straight to the food, was kind enough to indulge us, even though it was quite late and not one of us could even pretend to still be hungry. 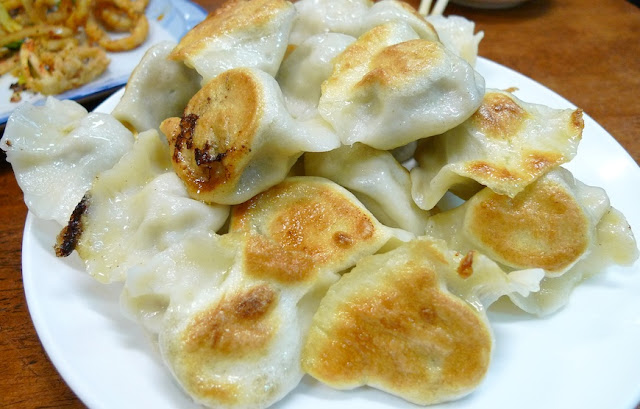 It was about 1 a.m. and the little shop was still full. I thought that they would only be serving dumplings but they actually had a full Chinese menu with a slew of rather interesting items that we probably would have ordered were it not our second meal of the hour. With some restraint, we ordered a plate of pork and shrimp dumplings, which was all we were supposed to have initially, but then succumbed to the enticing photo of the fried squid on the menu and ordered that too.

The squid turned out to be one of the best, most interesting fried squid dishes that I've had. It was served piping hot, with a light, crispy batter laced with the lovely, distinct, piquant flavour of cumin. Absolutely delicious.

The dumplings were good too - juicy and very tasty, especially when dipped with in bit of vinegar. A little oily, but only on the surface and not offensively so.