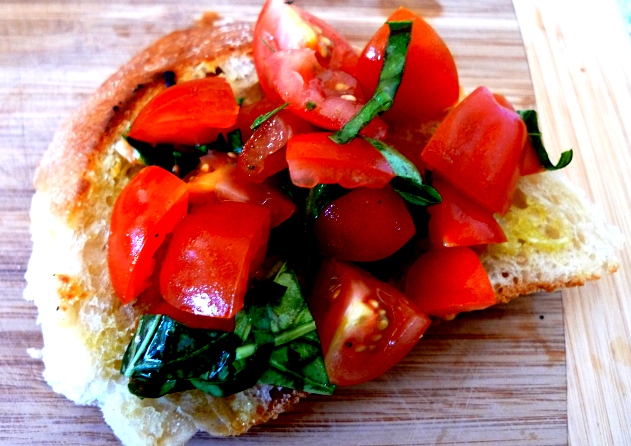 Ever since I watched Julie & Julia, the scene where Julie Powell pan fries lovely golden brown slices of bread to make tomato bruschetta has been haunting me. That has inevitably manifested into an irrepressible urge to make (or rather, consume) said bruschetta. I managed to somewhat allay this urge when my brother took me to a brunch place, a few months ago, that unexpectedly had 'Garlic Prawns Brushcetta' on the menu - which I will write about some other time. Nevertheless, the urge returned with a vengeance. So yesterday, four months after watching the movie, I finally made tomato bruschetta with S. 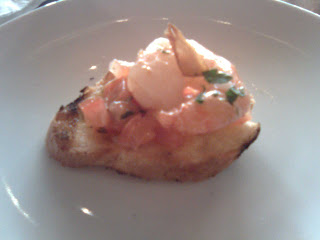 I looked up some recipes online, got the gist of how to make it and just winged it, as I usually do. Instead of rubbing the garlic on the fried bread, as per most of the recipes, for half the bread slices, we mixed grated garlic with olive oil and spread a layer on each slice of bread before pan frying them. This technique of course yielded a more robust overall garlic flavour than garlic-rubbing. I also decided to exclude the cheese because I wanted to keep it light and clean tasting. Besides, I don't think there was cheese on Julie's bruschetta in the movie. All in all, it turned out pretty well - the tomato and basil topping was very tasty and refreshing. My (self) criticisms would be that I should have seeded the tomatoes and diced them finer and used a French baguette instead of Italian ciabatta. I think this one will be a winner with the folks back home, so I'll definitely be making it on my next trip back. 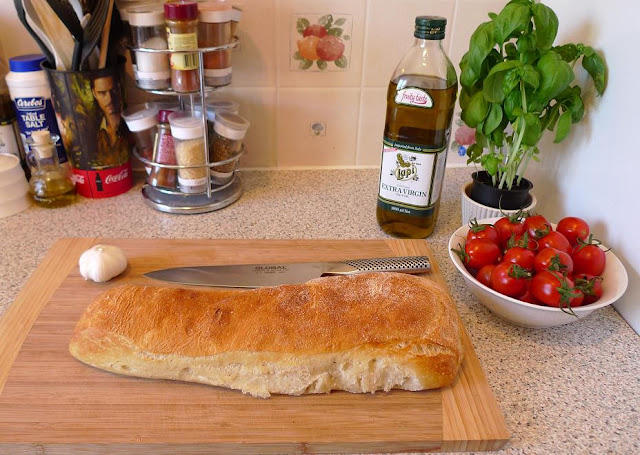 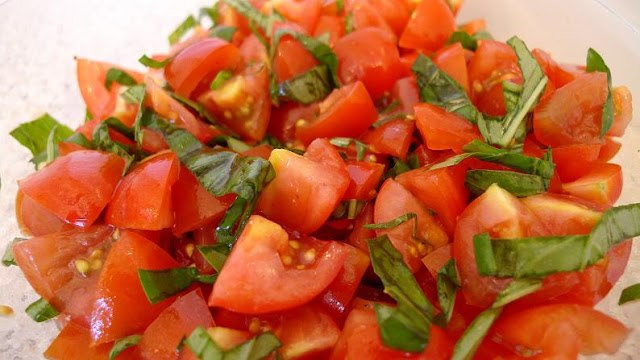 Method:
1. Seed and finely dice the tomatoes to approximately 0.5 - 1 cm size cubes.
2. Finely chop the basil.
3. Toss basil and tomatoes together in a bowl and season with salt, pepper and olive oil.
4. Grate or mince garlic and mix in a bowl with some olive oil.
5. Slice baguette diagonally, about 1.5 - 2 cm thick.
6. Spread a layer of garlic & olive oil mixture on to each slice and pan fry, oily side down, in a hot (dry) pan.
7. As one side of the bread is browning, spread garlic and olive oil mixture on the top side of each slice, then flip over to brown.
8. When both sides are golden brown, remove from pan, assemble on a serving platter.
9. Use a spoon to scoop the tomato and basil mixture, ensuring that you drain any excess liquid off the spoon.
10. Spoon tossed tomatoes onto each garlicky toasted slice of bread. 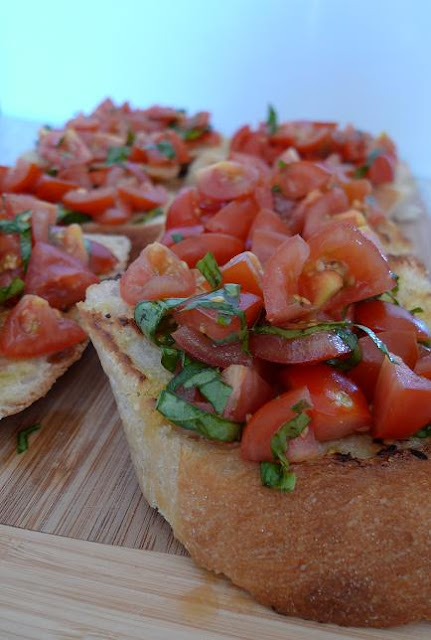