On the morning we were to leave Christchurch (after the 'Robin Williams weekend'), S and I discovered Drexels. We were meandering around the Riccarton mall and were almost going to settle for dumplings when I suggested that we check the directory for other options. Nothing really jumped out at us and Drexels sounded like just another cafe/brunch place but we decided to stroll over to have a look anyway. The place was packed and there were at least 10 people waiting for a table. We took one look at the menu and the charming American-diner-like ambience and we were sold. Besides, a crowd is usually a pretty good indicator that the food is good (don't get me started on the times when this rule has failed me). We had to put our names down on the waiting list and were told to come back in about half an hour (maybe an hour), but hell, it was worth it. 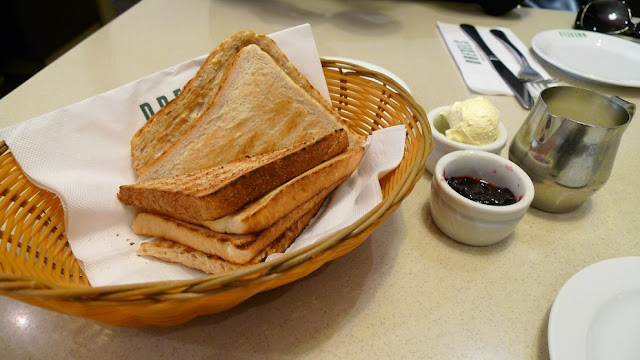 When we came back, it was about 11am and the breakfast crowd had left - the place was still full, but there was a little more breathing room. We were seated in a large booth (for just the two of us, i.e. they didn't keep us waiting just because there were no small tables available) with little fresh pots of jam and butter and a little jug of milk already on the table. Everything was spotless, even the jug of maple syrup (which as anyone knows, is next to impossible to use without leaving some syrup on the spout) - I was very impressed. S pointed out that they clear everything off the table after each customer leaves and set it up again with fresh, clean jugs of maple syrup, sugar pots, butter, jam, etc. On top of all that, after you order, they bring you free toast that you can enjoy with the lovely fresh butter and jam. Being city folk, that thing on the table that looked like a scoop of vanilla ice-cream (pictured above) threw us for a while. I thought it was (whipped?) cream or something and thought it strange that I never heard of Americans spreading cream on their toast. You see? - Honest reporting, even at my expense. A few seconds later, S said that it was butter - of course! I was so busy enjoying the toast that I didn't even bother thinking about it. Stop guffawing for a while and try to understand - we'd never seen butter that looked like that. Hitherto, the only butter we've had experience with came in the form of bright yellow, hard, blocks, usually wrapped in gold foil. This butter was almost white and beautifully fluffy. Divine! 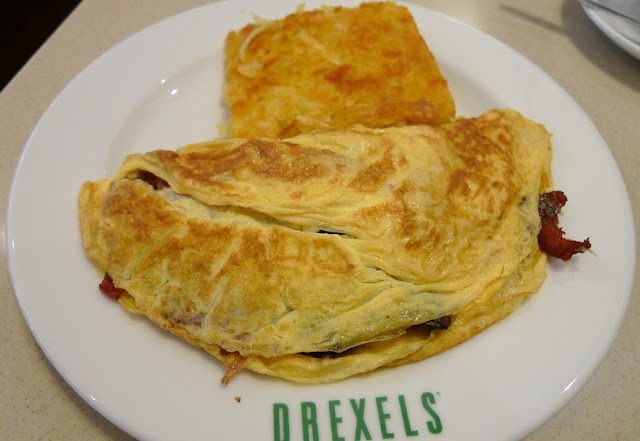 S had the Three Egg Omelette, Italian style (stuffed with ham, salami, mushrooms, tomatoes and cheese), which was perfectly cooked and delicious. It wasn't greasy (as omelettes can often be) and the tomatoes provided a burst of freshness and slight acidity to each mouthful. My fear of using fresh tomatoes in a dish like this is that they weep and turn the whole dish soggy - luckily this omelette was well executed and did not suffer that fate. S was also very impressed with the hashbrown, but I can't remember exactly why - something about "this is what hashbrowns are supposed to taste like". I was kind of focussed on my own plate. 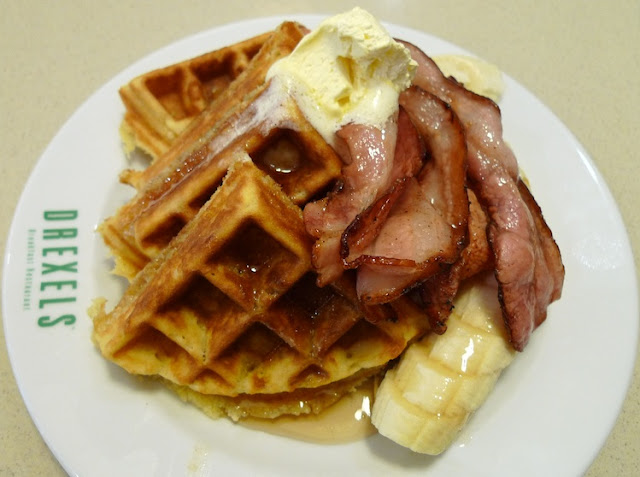 My breakfast was the Full Waffle with banana and bacon (as advised on the menu) and it was sublime! Without a doubt, the best waffle dish that I have ever had. The servings were very generous - I got lashings of fresh bananas of the perfect ripeness (not too mushy or green) and perfectly grilled, lovely savoury bacon and the waffle was nice and thick, as proper waffles should be. It was crispy on the outside and soft on the inside and had that exact waffly texture and flavour. Beautiful! Any waffle lover will tell you that there's nothing quite like the sight of a real, authentic, thick waffle with lovely, large deep pockets to collect all that deliciously sinful melted butter and maple syrup. MMMM! The combination of the sweet waffle, maple syrup and bananas and the savoury bacon and butter was just heavenly.

As soon as we left, we were contemplating our next trip back to Christchurch just to dine at Drexels again. Nothing like a good, incredibly satisfying Sunday brunch to kick off your week, I say.