A few years ago when I visited Melbourne, my friends took me to a restaurant called Gold Leaf for dim sum. I remember it being really good - possibly the best dim sum that I had ever had at that point - but I don't remember much else, which is a little strange to me because I usually remember specific things that I particularly like/dislike about places.

As I had previously raved about the dim sum in Australia and because we're so deprived of good dim sum here in Dunedin, when S & I visited Sydney a few months ago, it was right at the top of our list of things 'to eat'. Luckily we had some foodie friends in Sydney who directed us straight to Zilver. The long and the short of it is that we had dim sum at Zilver thrice over four days and now S flatly refuses to eat dim sum at any of the Dunedin restaurants (S now stands for SPOILT).


First of all, they serve dim sum the proper way! - i.e. by pushing trolleys full of food around the restaurant and stopping at each table so that customers can choose what they want. None of the 'modern' ordering dim sum ala carte b.s. that is the norm in KL now. If I remember correctly, I was still in primary school the last time I went to a restaurant in KL that still served dim sum the traditional way. How sad is that?

Secondly, the dim sum at both Gold Leaf and Zilver were far superior than the dim sum that I've had in KL. According to Pops, most of the restaurants in KL now serve mass produced, factory-made dim sum, which is why they mostly taste the same (not terrible, but not particularly good or interesting). The second time we were at Zilver, as we were contemplating what to scoff next, I overheard one of the waitresses saying (in response to a customer's query about when a specific dim sum would be ready) that the 'si fu' (Cantonese for 'Master', as in master of an art, e.g. Kungfu Master, Master Chef, etc) was eating lunch, so whatever it is they had asked for would only be ready later. That obviously means that they actually have a dim sum master and they make their own dim sum in their own kitchen.


And of course, it shows in their food. Not only did they have some excellent dim sum that I had never seen in any other restaurant, but even their standard dim sum ('siu mai' a.k.a. pork dumpling, 'har kau' a.k.a prawn dumpling, 'char siu pau' a.k.a barbecue pork bun) were exceptional. As I am sure you have surmised, the food was fantastic (with the exception of the roast pork, which was tough, dry and not at all tasty and the fried noodles, which was bland), as it would have to be to warrant three visits in a four day overseas trip. Incidentally, I also had a delicious bowl of 'tau foo fah' (soy bean custard/pudding) that didn't photograph very well but deserves to be mentioned because the flavour was exactly right and it one of the smoothest, silkiest soy bean puddings that I've ever had. 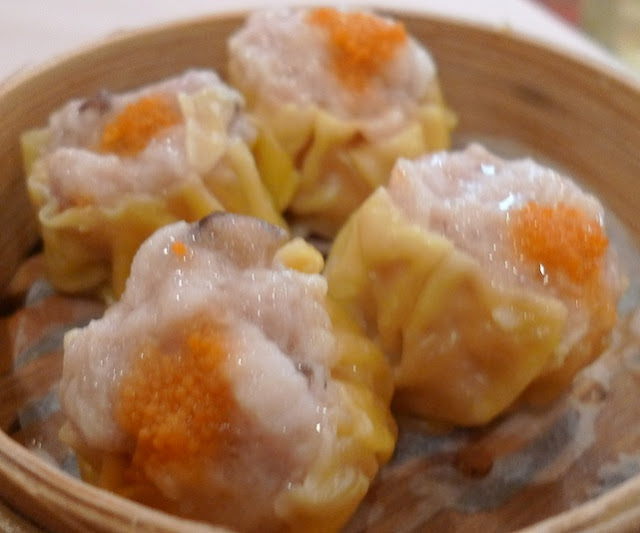 Siu Mai (Pork Dumpling): Unlike the mass made variety that normally has a very finely minced filling, this siu mai was filled with delightful chunks of prawns. The complex flavours and textures were a surprising revelation  - this is what it can taste like and now I am probably never going to enjoy siu mai at a normal restaurant again. 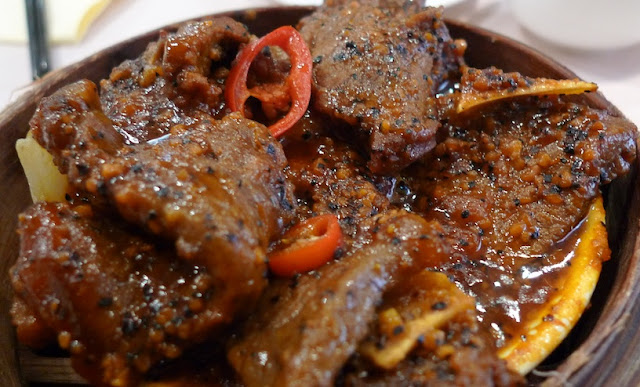 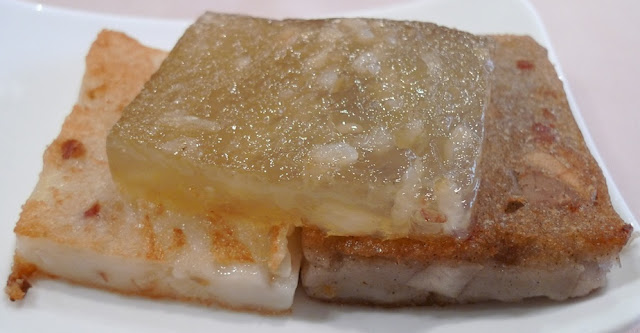 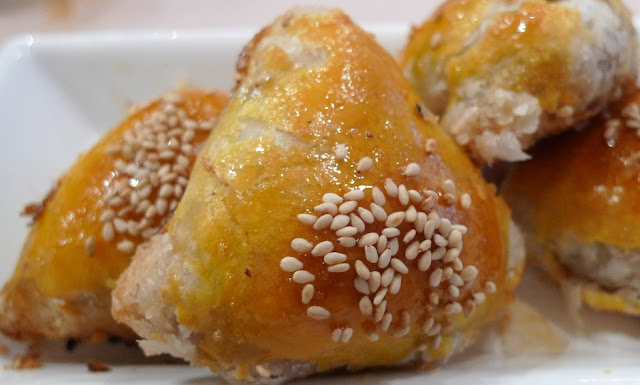 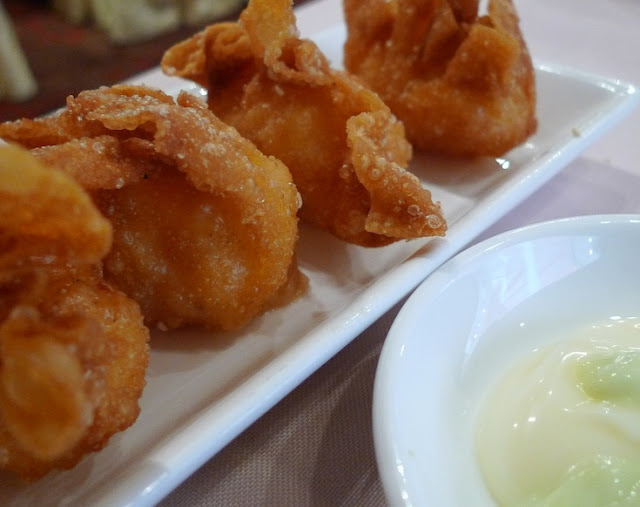 Deep Fried Prawn Dumpling - I am not exactly sure what this one is called even though it is one of the common dim sums and one fo my favourites. J called it fried 'har kau'. Whatever it's called, it's good. Crunchy, crispy (wonton?) skins stuffed with lovely tasty fat prawns, dipped in mayo (I didn't care for the greenish wasabi mayo). MMM! 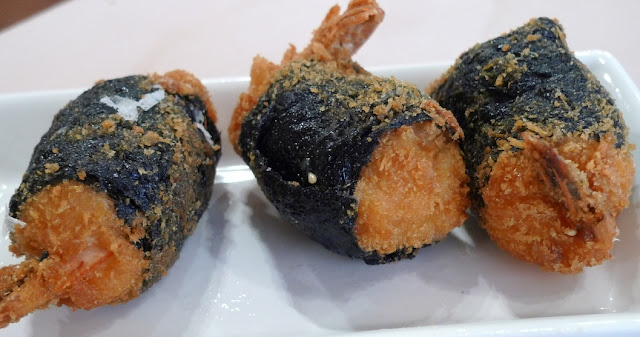 Seaweed Prawn Rolls - Again, fat rolls of prawns. Can't go wrong with that if you're trying to please me! This was the first time that I had the immense satisfaction of biting into a big springy, tasty, crunchy ball of prawns. You know they say you can't miss what you've never had? Well now I've had it and I want more! This is going to be an expensive addiction if I have to buy a plane ticket every time I need to feed it. 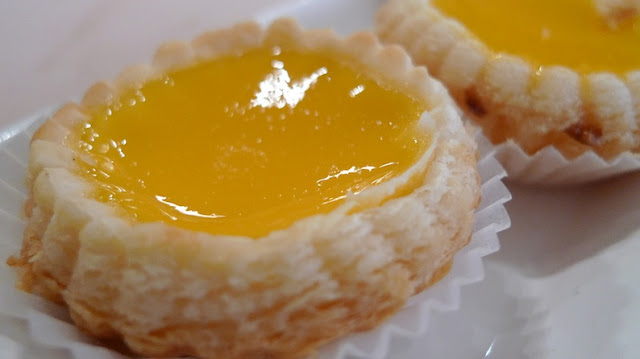 Egg Tart - And to think S was going to leave without tasting this. Just look at the layers of flaky pastry and the golden yellow, smooth egg custard. On our second visit, we managed to get a table right in front of the entrance to the kitchen and so got first dibs on these as they came out, freshly baked and still lovely and warm. We got there at about 10 am that day and had eaten most of what we wanted in an hour. We were both quite full and were going to go to Tetsuya's that night, so it was supposed to be a 'light' lunch. Then I remembered that we had forgotten to get egg tarts the day before. I knew S would want some as soon as she saw them but she thought that she was too full to have anything else. The waitress said that the egg tarts wouldn't be ready until 11:30 am so I figured that if I stalled for a while longer, we could get the egg tarts and S would feel like eating them by then. Luckily, that was exactly what happened and S absolutely loved them. They're like beautiful, rich, sweet, buttery little bites of melt-in-your-mouth sunshine. 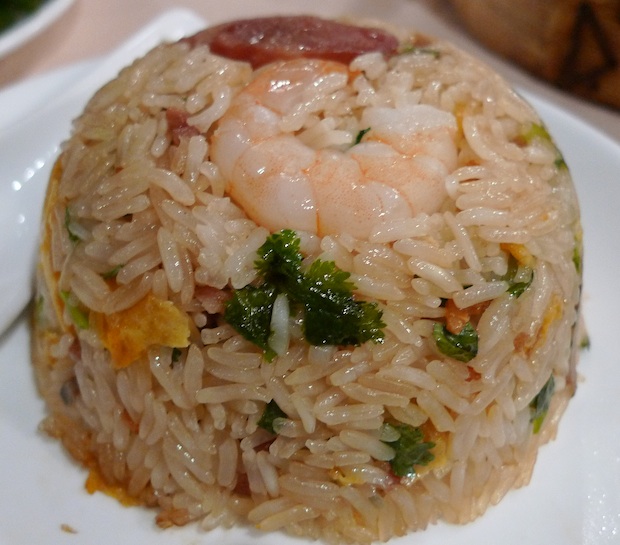 Lou Mai Fan (Steamed Glutinous Rice) - Incredibly tasty and perfectly cooked. Normally glutinous rice is very sticky, soft and smooshed together but as you can see, the individual grains of rice are clearly... individual, and firm. It was seasoned well and had nice chunky bits of prawn, chinese sausage and egg. 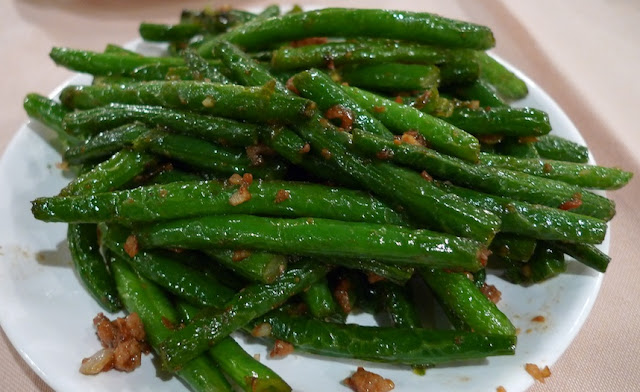 Green Beans Stir Fried with Garlic and Dried Shrimp - One of my favourite vegetable dishes. Simple, tasty, homey and satisfying. 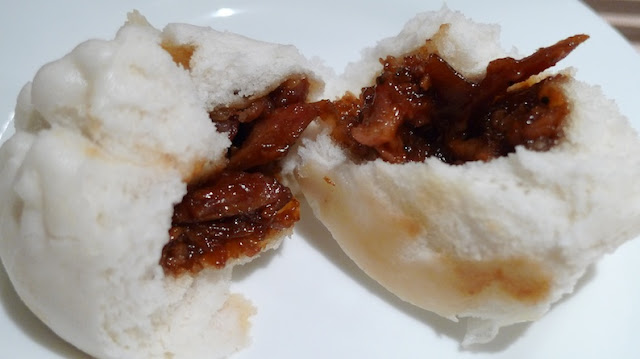 Char Siu Pau (Barbecue Pork Bun) - As described in the first photo. You'll notice that unlike the artificial red colouring commonly found in its mass made cousins, the barbecue pork filling in this bun is a naturally dark caramel colour.

Special thanks to J and L for being great city hosts while we were in Sydney and for recommending Zilver.