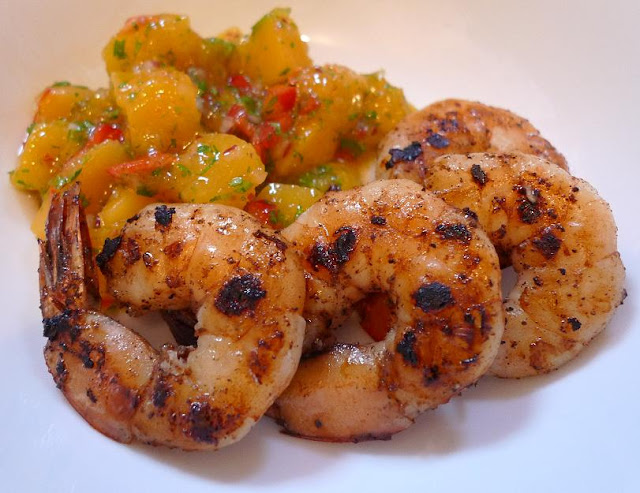 S made this (with me hovering in the background) in May 2010 and I have been holding out on writing about this, even though it is a real favourite of mine and just about everyone else who has tasted it, because I wanted to get a better photo. The first time S made this, there were no good mangoes available here so we caved and bought canned mangoes, which were revolting (as you can see from the colour in the photo).

Chef John's Mango Salsa recipe, however, was sound enough to withstand our adulteration. Even with the horrible canned mangoes, the salsa was pretty good and we could easily imagine how great it would be with fresh mangoes. S has made this salsa many times since and it is always, always beautifully refreshing, tangy and absolutely delicious. It's that great accompaniment that lends that all-important zing to barbecued, smokey, rich proteins. Unfortunately, despite numerous attempts, this is still the best photo for this dish.

Instead of the salmon in the orignal recipe, that first time, we shrimp fiends opted for Chef John's slightly naughtier 'Barbecued' Shrimp, which incidentally was also finger-lickin', lip-smackingly tasty. Sadly, if I remember correctly, we've only had the shrimp twice (because I'm lazy and rely entirely on S's charity when it comes to cooking).
Posted by t at 12:09 PM