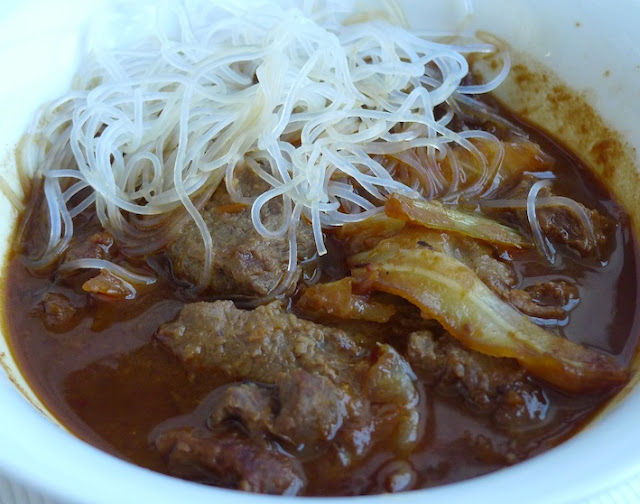 This was a dish that E and I had almost weekly when we were in varsity and I've wanted to share the recipe for years. We used to frequent a little hole-in-a-wall Chinese 'restaurant' (using the word very loosely) called Wayne's Food Bar. The food wasn't particularly great, but it was one of the first places that we tried when we arrived in town and we just kept going back because it was familiar and cheap - we were students then after all, and weren't quite as free to explore and indulge our gastronomic tendencies as we are now. When I think back, I find it quite amusing that I don't recall being quite as fussy or critical about food then, as I am now. It's a definitely a full blown, chronic affliction now - and they say people mellow with age.

Anyway, I always had the teriyaki beef at Wayne's, until one day, E ordered the lamb stew. What a revelation. I'd never had anything like that before. It had great warmth and was earthy, rich, complex, hearty and comforting - the perfect antidote to a winter's evening here. E and I had many a lamb stew at Wayne's until one sad day in our second year here, when we discovered that Wayne's had closed for good. We didn't know they were closing. We should have been better customers. The next few weeks (maybe months) were spent lamenting the fact that we missed having one last, good stew, for the road.

A few years later, after E had moved away, I received a very excited email from E proclaiming that she had discovered the secret ingredient to recreate Wayne's Lamb Stew. Okay, so maybe it wasn't a secret to others, but neither of us (up till then) had been able to identify the source of the stew's base flavour - probably because it wasn't something that either of our mothers or grandmothers used in their cooking. The lamb was marinated in preserved bean curd! E, being the magical cooking fairy that she is, managed to figure out the rest of the ingredients and successfully recreated the lamb stew that we had been missing. Of course, I immediately got the recipe from E and went straight to my other cooking fairy godmother with it. S wasted no time whipping it up, and it was good.

S has since tweaked E's original recipe, to achieve the right flavour with the sauces and ingredients that we have here. And it's probably not exactly the same as the stew we had at Wayne's all those years ago.  But it's still delicious and an excellent dish to cook in the winter, which is partly why I am only writing about it now. The aroma that fills the kitchen as it is cooking is as mouth-watering as the dish itself. Don't be put off by the ingredients. Just try it.

Ingredients:
About 1kg of lamb, cubed

Instructions:
1. Marinate the lamb with the Marinade. I usually leave it over night in the fridge and take it out 1/2 hour before cooking it.
2. Heat up some oil in a med high pan and fry the Herbs & Spices, except ginger and garlic, till fragrant. Usually around 3-5 mins.
3. Put in smashed garlic and remaining ginger. Saute till fragrant.
4. Add the marinated meat, and stir fry till the meat changes color. Add the additional preserved bean curd and fry till the meat looks semi-cooked.
5. Add the Sauce ingredients, except wine, and turn up heat to bring to boil. Add chili flakes if not spicy enough.
6. Boil for 10-15 mins, and then turn heat down to med low and let it simmer, adding the wine once stew has stopped boiling (this ensures that the wine does not evaporate too much).
7. Just before serving, add in chinese cabbage (if you want to, or serve separately) and cook it till the stems are soft.
8. Serve with steamed rice.
Posted by t at 10:00 PM