Hong Kong 2013 Part I: Chau Tau Foo and Other Adventures

Thanks to my aunt's generosity, I end up visiting Hong Kong again this year. The following are the events that transpired (and the food that was eaten):

On our first night, Aunt's friends (T & L) took us to Temple Street, where fortune tellers, random 'karaoke' singers and other assorted 'entrepreneurs' lined their tent stalls for the night's trade. I was most amused at the 'singers', who were simply standing by themselves, at the side of the road, singing (neither poorly nor well) over recorded music piping out of old fashioned stereos - is there really a living to be made of this or do they do it for their own pleasure? And apparently you can make song requests! I imagine that you would have to pay them something for that, but I can't imagine anyone paying to hear a bad cover of a song they (presumably) like, in a back-alley, among hawkers. It has been quite a while since I last entertained a notion that I found so equally baffling and entertaining.

After Aunt got her rather unimpressive palm reading, we ended up in Mongkok where I had my very first 'chau tau foo' (smelly tofu). Actually we (Pa, Bro and I) came across the same stall last year but had just consumed a rather large roast goose lunch, so I couldn't quite manage anything else at the time. We were ambling along when Pa stopped in his tracks, raised a finger in mid air, indicating to the atmosphere, and amusedly asked, "Aha! Can you smell that? Do you know what it is?". I took a whiff and smelt the odour of my beloved salted fish, but since we were in Hong Kong, I guessed that it was chau tau foo. I thought it smelt fantastic! Pa then, chortling, proclaimed that I was "a real Chinese" and the first person he knew who loved the smell of chau tau foo. The smell comes from the fermented brine that the tofu is marinated in, which apparently smells like garbage to most others. Quite the manifestation of 'one man's garbage...'

This time, the conditions were perfect - it was cool, close to midnight and there was a fantastic, more relaxed, market atmosphere with lots of people eating and walking around, unwinding after a long day's work (in contrast to the busy, restless, work day crowd Pa, Bro and I encountered during the lunch rush last year). T & L very kindly got us some chau tau foo, slathered with all the appropriate sauces, and initiated us on the intricacies of CTF appreciation. Aunt had to be convinced to simply try a bite, but not I. The skin was wonderfully crispy and savoury and all the lovely intense sauces (sorry, no idea what they were) that were smoky, spicy, sweet, salty and bean-y made it quite a delicious treat. Without the skin and the sauces (i.e. the insides), it tasted just like regular tofu.

We then moved on to Yuet Hing Yuen (33 Soy Street, Mongkok) where we had Vietnamese noodles with the most potent, intoxicating broth and ended the night at Lucky Dessert (25-27 Soy Street, Mongkok) with some pretty decent tong sui - I had my favourite 'pak gor yee mai' (gingko & barley), with a twist, i.e. the addition of 'tau foo fa' (soy bean curd). 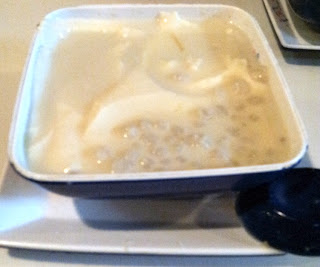 When we got back to the hotel, I realised that my phone wasn't detecting Aunt's internet hotspot so I resigned myself to internet deprivation until Monday. The significance of this will be explained later.