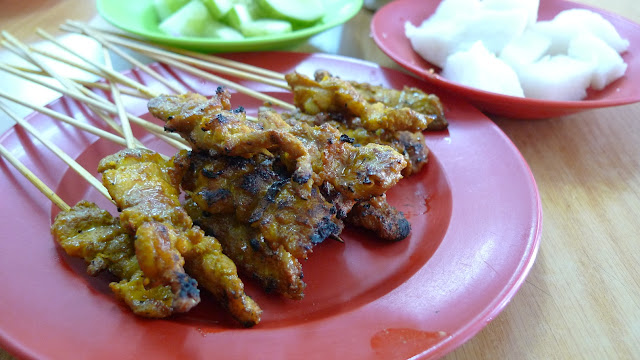 Whenever I happen to be in Malacca, I make it a point to have the pork satay at Sun May Hiong Satay House. It's something I grew up having only in Malacca, during our visits to the grandparents and so the city and this pork satay are inextricably linked in my mind. For non-Malaysians, satay is a traditionally Malay dish, most Malays are Muslim and abstain from pork, so pork satay is rarely found outside Malacca. Therefore, even though this satay house (calling it a restaurant feels like a bit of a stretch) moved to different locations around the city throughout the years, we faithfully tracked them down to sate our appetites for this delicious local treat. Without a doubt, it is my favourite type of satay and sauce.

I was told throughout my childhood that the satay sauce at Sun May's is made with 'belimbing', giving it a bright, sourish, tanginess that sets it apart from the traditional sweet peanut satay sauces. Unfortunately, I cannot tell you whether this refers to starfruit (which is 'belimbing' in Malay) or its cousin the Averrhoa bilimbi. Whenever I referred to it as starfruit, as a child, I was corrected by my parents who insisted that the 'belimbing' in the sauce was not the plain ol' starfruit I was used to. My search on Google yielded the Averrhoa bilimbi as the closest possible alternative but I have never seen the sauce being made, so I have never been able to verify this. 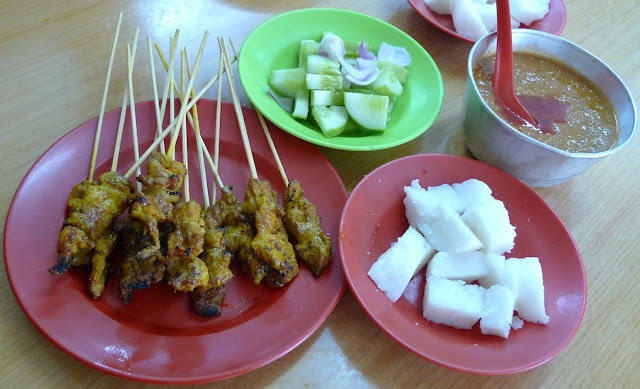 The combination of a coat of this delicious, tangy sauce on the properly charred, tasty, salty pieces of skewered pork is bliss, even in the blistering tropical heat that usually accompanies our trips to Malacca. The best part about this type of dining is that you don't have to order your food. As soon as you sit down, you are automatically given little pots of the satay sauce, ketupat (cubed, packed rice), cucumber and onion slices (that are all best enjoyed slathered in the sauce) and then various types of satay (pork, chicken, intestines, etc. - you can specify your preferences if you want), hot off the barbecue, are delivered to your table. We used to be able to devour 40 sticks each, but can now only manage 20 on a good day - ah, the appetites of teenagers. The only thing that isn't ideal (especially if you are hungry) is the occasional long wait between satay servings - but I suppose that is the price of getting them fresh off the coals, so you'd best allay your hunger and impatience with those cucumbers and ketupats.