I am sorry I have been remiss in my blogging this year - moved to a new country and started a new job. Since I came into possession of a smartphone with a half-decent camera last year, I have also neglected to use the proper camera to photograph my food - and it shows. Now that things have settled down a bit, I resolve to do better - starting today, after the outcome of this recipe left me feeling chuffed enough to get out the good camera and write about it this very night. 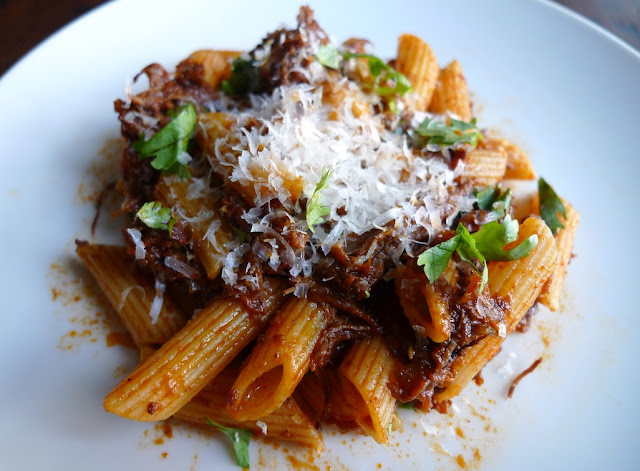 I had been missing the Beef with Red Wine and Rosemary on Rigatoni from Zucchini Bros, which sadly, I have not written about. I scoured the web for likely recipes but could not quite find one that would have produced a copy of the Zucchini Bros dish. Nevertheless, there were a few that looked promisingly meaty and rich, so they made the shortlist. I consulted M, as I do with all things Italian, and he picked this one. I had my doubts when it was cooking, because I, as usual, hadn't quite followed the recipe to the T. Luckily, it was forgiving.

Now to me, a ragù is a sauce with meat so tender, it falls into shreds when pressed. According to Wikipedia, however, a sauce with minced meat could also qualify, and though a ragù is in some ways similar to the French ragout, they are not the same thing. Someone out there will know the detailed culinary differences as, alas, I cannot enlighten you here today.

Despite my numerous failures, this ragù turned out beautifully rich, velvety and packed with flavour. The first hurdle was finding that I did not have enough wine, even though I was quite sure that I left half a bottle in the fridge specifically for this dish (but underestimated my brother's unquenchable thirst). Then I thought I must have used a bit too much tomato paste because I could taste its harsh metallic acidity in the sauce for the better part of the cooking process - so I threw in some sugar. After that I realised I had to switch to the smaller burner because the sauce was reducing far too quickly. It had only been cooking for an hour and because of that mistake, there wasn't enough liquid for it to continue simmering for another hour. To rectify that, and because I am slightly obsessive (the thought of a partial box of stock in the fridge was irritating me), I poured the rest of the 1 litre box of stock into the pot. And finally, for the garnish, I had thoughtlessly purchased Chinese parsley (i.e. coriander/cilantro) instead of European parsley (although this had next to no impact on the dish). All in all, I don't think these things really changed how it was supposed to turn out (had I adhered to the recipe) - I only did what I did to fix my mistakes, not improve the recipe. The one thing I intentionally changed was to substitute the canned peeled tomatoes, which I can't abide, with tomato puree. So I'll share the recipe as it is for now and adjust accordingly, if needed, the next time I make this - and there will be next time.

Method
1. Heat olive oil in a large, heavy-based saucepan and fry beef pieces in two separate batches until beef is well-browned. Remove from pan. Add pancetta and a little more olive oil and fry on medium heat until golden.

2. Meanwhile, cut vegetables into 2cm dice. Add vegetables and garlic to pancetta and cook for about 5 minutes. Add the rosemary, tomato paste and red wine and simmer for 2 minutes.

3. Return beef to pan with tinned tomato, stock, salt and pepper, and bring to the boil. Turn down heat, cover with a tight-fitting lid and simmer on the lowest heat for 2 hours. Stir every half hour.

4. When beef is soft, use a fork to tear into shreds. Cook pasta until al dente, drain and toss with olive oil. Serve in large bowls with ragu spooned on top. Garnish with parmesan and parsley.
Posted by t at 12:44 AM