No. 7 Balmac's rustic, casual-chic charm reminds me of Riverstone Kitchen. After patronising most of the fine dining establishments in Dunedin over the last nine years, I've decided that I much prefer this relatively relaxed ambience over the sometimes overly stuffy and haughty character conveyed at certain other posh restaurants - particularly since the food at some of these more relaxed places is comparable to the the food at the 'posh' places. I use the terms 'fine dining' and 'posh' very loosely when referring to restaurants here - in Dunedin they simply mean restaurants where the mains cost about $35 or more and are not pure bars or cafes. While places like No. 7 Balmac are nice, upmarket restaurants, you wouldn't exactly call them 'posh'. The food at No. 7 Balmac, however, ranks second in Dunedin on my list, and I have a far more enjoyable time there - after all that's all that matters.

NB: Before we begin, I must apologise for the quality of the dessert photos - we usually lose the light by the time desserts arrive and 'cosy' restaurant lighting isn't conducive to food 'photography', particularly when you know next to nothing about photography.

In October, we celebrated P's birthday there with his friends. Everyone order the same main, except S. It was a really good night. The food was great and after dinner we introduced Cranium to the guys and everyone had riotous time. P-the-Creative-Cat-fiend, especially, loved it. 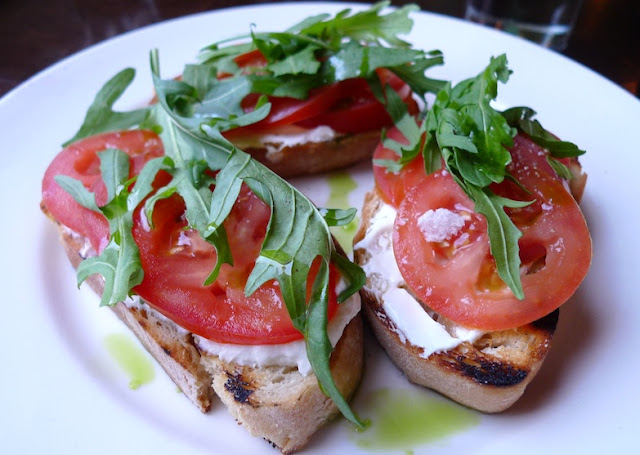 Bruschetta: Very, very good, but not quite as amazing as the first time I had it (perhaps earlier in 2011). Then, it was made with buffalo mozzarella, tomato and basil and the combination of beautiful, fresh, natural flavours was exceptional. This time, instead of basil, I think it was rocket? - sorry, I can't remember and can't say for certain from the photo. 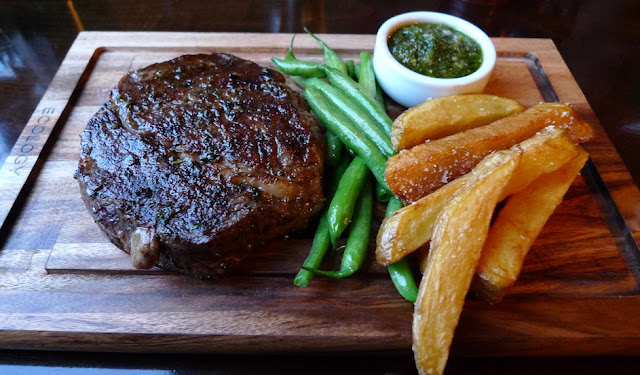 Hereford Prime dry-aged scotch fillet: This was the main that everyone but S had. A very nice, tasty, rustic meal. Especially loved the hand cut chips and the deliciously bright chimichurri sauce. 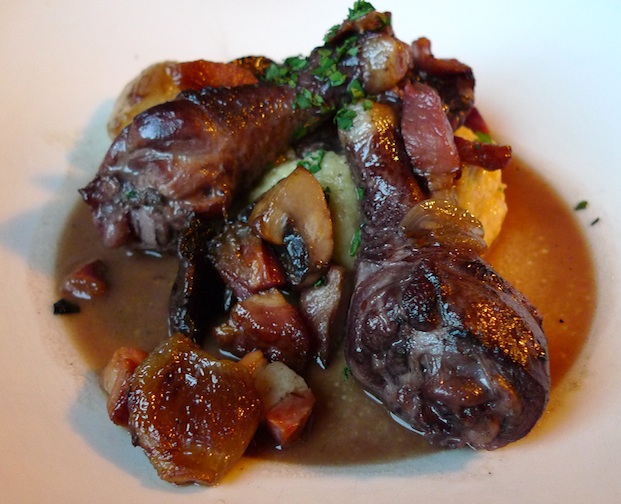 Coq au vin: S's main. She loved it. I had a bite but I don't remember much about it except that it was subtly flavoured. 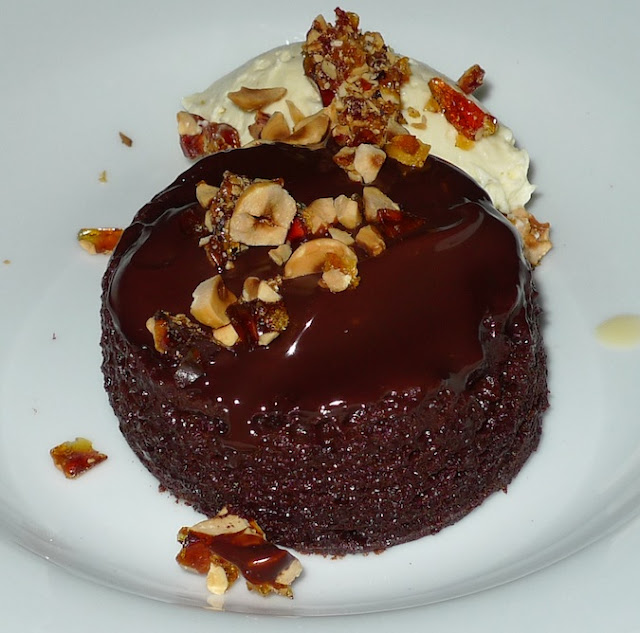 Flourless warm Belgium chocolate pudding, vanilla bean ice-cream & hazelnut praline: It had an incredibly light, soft, texture but was still lovely, sumptuous and chocolatey. Mmmmm. Divine. I loved this so much that I ordered it again when we revisited in November. 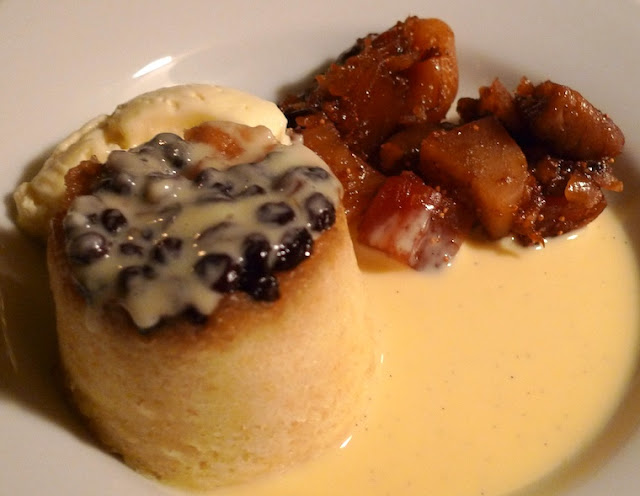 Steamed currant pudding?: I am not 100% certain of what this was called but S enjoyed it. 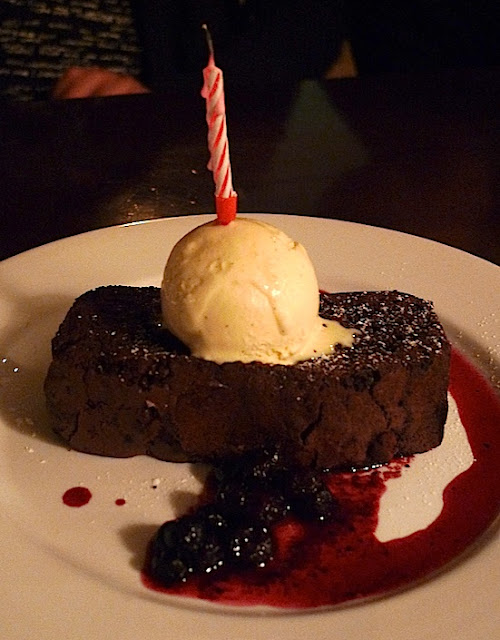 Warm real chocolate brownie with ice-cream: Most of the guys had this. A large chunk of warm, chewy, chocolately brownie, topped with ice cream. One of the guys ordered the chocolate pudding, had a bite of the brownie and wanted the brownie instead. I preferred the pudding but I think the guys were partial to more weight, chew and bite to their chocolate thing.


Fast forward to November - no particular occasion other than to have a good meal with friends. 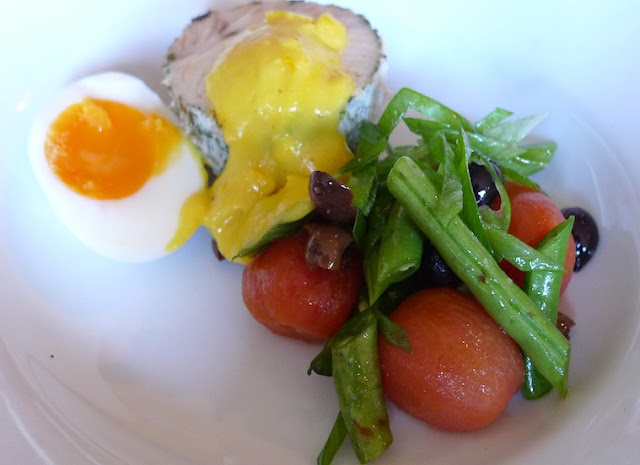 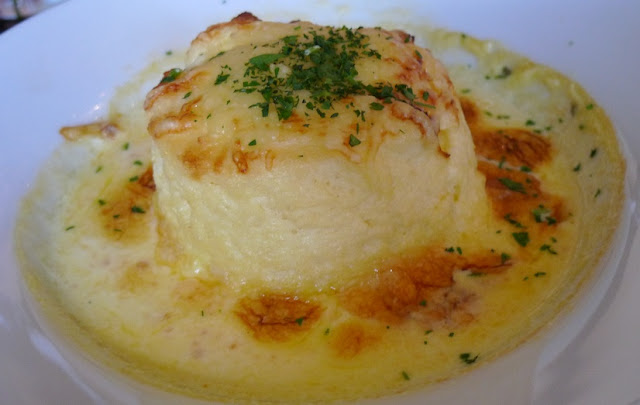 Twice baked three cheese souffle: Like the airiest, cheesey omelette imaginable. So delightfully good that M was compelled to create a version of it the next day. 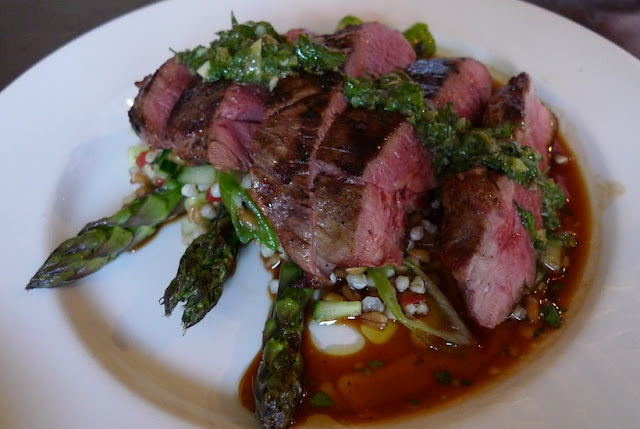 Roast Cardrona merino lamb: S's main, which she didn't like. Apparently the lamb was gristly and the accompaniments did not complement. 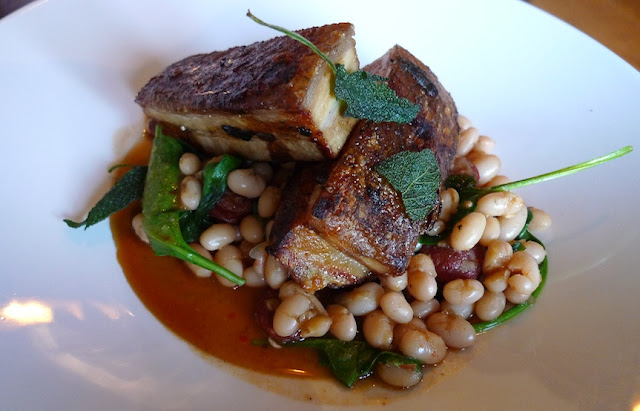 Twice cooked BBQ belly pork: M's main that night. He thoroughly enjoyed it and the bite that S tried was enough to persuade her to order it when she returned some weeks later - she loved it too. 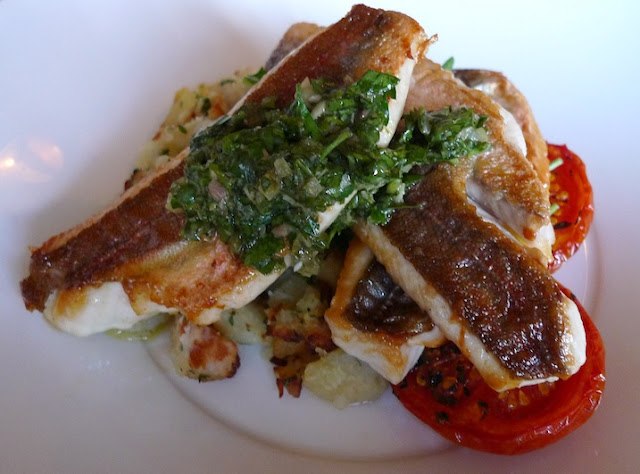 Fish of the day: The fish was cooked well - juicy, tender flesh with nice salty, fried skin. But the salted fish in the mash was overkill and that spoilt an otherwise enjoyable dish. 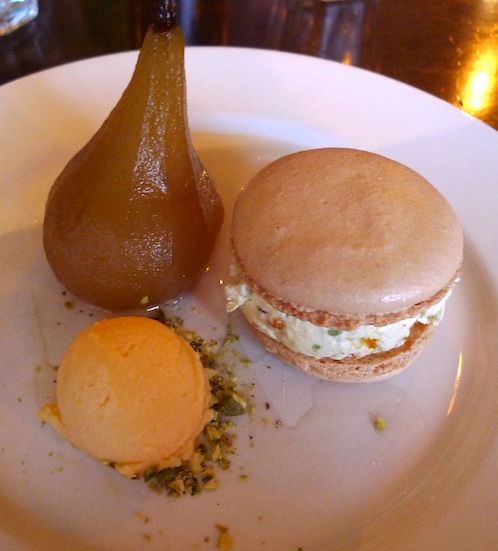 Poached pear, macaron, lemon curd ice-cream & pistachio: The poached pear and ice-cream were good but I did not enjoy the macaron with the flavoured cream cheese filling at all.

you post this as your 2nd most favourite in dunedin... yet i kept reading a number of negatives; this didn't go... i didn't like... gristly...
how then do you base this restaurant as your 2nd favourite!

First of all, you will agree that there were far more positive comments than negative ones? I was also conveying the comments of others, not just my own. And lastly, even in the best restaurants, not every single component of every dish served will be to everyone's liking. It is a matter of preference after all. I have also had some forgettable dishes at my favourite restaurant in Dunedin.

Very informative blog! - Especially this post. I've been looking all over Dunedin for a decent restaurant for my upcoming birthday. It's been a long search. I think they removed the poached pear from their dessert menu, but most of the favourites seem to have stayed. We'll be dining here in a week. Thanks for the photos and honest reviews!

Thank you Anna. Actually I just dined there 2 nights ago and the meal was excellent. Had the risotto, wood-fire chicken and the brownie. Was ridiculously stuffed by the end it, but everything was excellent. I swapped the ice cream that normally comes with the brownie in favour of the blackcurrant sorbet, just because I love the blackcurrant sorbet.