As scheduled, on Saturday (9th September) we visited Etrusco. I liked the ambience a lot. It's like the Italian version of Lone Star, which in turn is sorta like Chilis back home but with way better, heartier AND healthier food (no burgers!). Warm, friendly, casual and bustling! I don't know if it was just because it was a Saturday but man they had a rapid turnover! People just kept coming in and filling up the places of people who had just left. I don't know how they managed it though because the mains took FOREVER to come.

According to their website they offer "a wide range of tasty pasta dishes and pizzas from the menu of traditional Tuscan favourites." I don't pretend to know what Tuscan food is like so I'll take their word for it. I will say that, for me, just the word 'Tuscan' invokes thoughts of sunflowers, delicious, mouth watering Italian food, rustic, romantic little towns and beautiful landscapes. I blame the movie Under The Tuscan Sun entirely for my mind's representation of Tuscany. 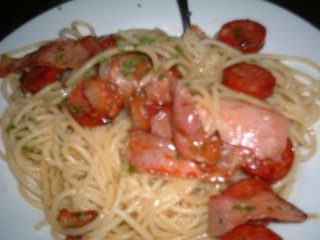 Etrusco is famous for its pasta. I had the Spaghetti Amatriciana Bianca [chopped garlic, extra virgin olive oil, Pancetta (cured ham), Italian sausage and chilli, tossed with spaghetti; pictured above] and I thought it was pretty good, except that maybe the flavour of the pasta was a little too subtle for my tastebuds (which are accustomed to the strong flavours of Asian food). I still thought it was good though, and I especially liked the Italian sausages, which were not subtle. They were as salty as sausages should be, with a slight spiciness that faintly stings your tongue just as you bite on them. 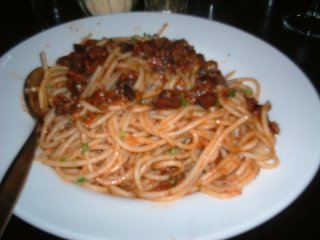 In contrast, the Spaghetti Alla Puttanesca (a black olive, tomato and anchovy sauce on spaghetti; pictured above) that S had was very strongly flavoured with anchovies and hence, very salty. B had the Spaghetti Alla Marinara (combination of mussels, shrimps, tomatoes, plenty of fresh garlic and fresh parsley; pictured below), which was thankfully nothing like the marinara pasta S had at The Black Dog. They both liked what they had very much. 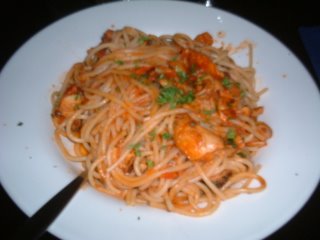 I didn't take my camera with me because I didn't think that a plateful of pasta, no matter how good, would picture well. But S did so when she gets around to passing the pictures to me, I'll post them here.

We also had starters and desserts but I didn't think that they were very interesting. My chocolate 'cake' stuffed with blueberries and cream and covered in fudge paled in comparison to my favourite (simple!) mud cake at Rafael's because the cake was dry and had poor texture.

On the whole, I think everyone liked the place a lot and we will definitely be going back to try more items on their menu (even though the wait for just our mains was perhaps over an hour)! 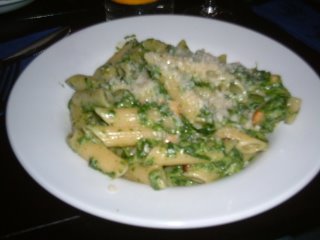 (Pictured above is the Penne Al Verde, penne pasta tossed in spinach and toasted pinenuts with a dash of cream and fresh parmesan.)