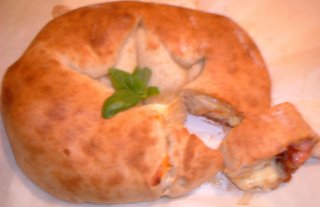 This week, for Tuesday's dinner, I managed to dupe S into making something I've wanted to have (i.e. taste) ever since I saw it on The Naked Chef. I'd been badgering E (my flatmate at varsity who, incidentally, loves to cook) to make it for the longest time! But it never happened. I don't remember exactly when I saw it and when I told her about it, but I think by then we'd graduated and were back home (or something like that).

Anyway it was the At The Beach episode and the bread rolls he made on that show looked SO damn good. The savoury one was stuffed with proscuitto, eggs, sun-dried tomatoes, cheese and herbs and the sweet roll was filled with bananas and Nutella. It was the savoury one I was after. It looked so simple, delicious, hearty and (possibly) immensely satisfying. 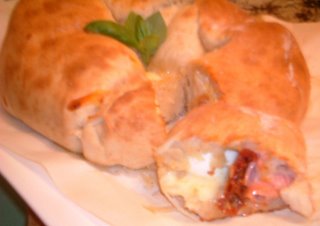 However, at the time, we hadn't found the exact recipe, so we had to settle for making it by someone else's guess at the recipe (found online of course). It looked pretty good when it came out of the oven. But when we actually ate some, we found that the bread was a little tough and dry and that made the stuff inside the bread dry too. It turns out, instead of drizzling olive oil on the ingredients before rolling up the dough (like in Jamie's recipe), this person's recipe incorporated the olive oil into the dough. Maybe that's why the whole thing turned out dry-ish. It was still okay though. Everyone tucked in quite happily and almost everyone had at least a second helping.

We (and when I say 'we' I mean S doing all of the real work and me just hanging around the kitchen or sitting in the lounge watching tv, occasionally offering to grate cheese or some other trifling thing like that) are definitely going to try to make it again, with Jamie's recipe, and we'll see how that turns out.
Posted by t at 10:28 AM