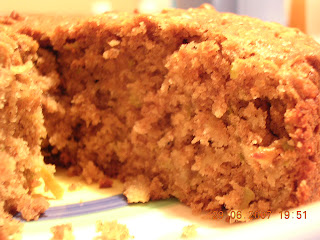 Yesterday I baked a Spiced Apple Cake myself! The only thing I didn't do myself was take it out of the oven. Luckily for me, Sab was keeping a watchful eye on me, while cooking dinner at the same time, and was prepared for my obtuseness when it comes to baking. The recipe is so simple (Thanks Michelle!) and pratically idiot-proof, yet I probably would have messed it up if not for Sab's consultation. It smelt really good and turned out okay but it wasn't as sweet as Michelle's because I skipped the topping (didn't have rolled oats). It should still be decent if warmed and served topped with vanilla ice cream. 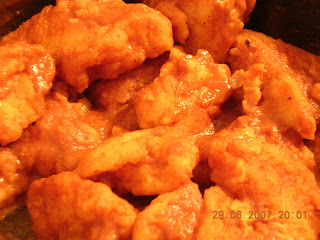 For dinner we had a fish curry concoction. We actually had an extra bottle of Tandoori Palace Chicken Tikka Masala sauce left over from Monday that we'd accidentally opened but didn't need. The stuff needed to be used within 5 days of opening, so I thought it would be a good idea to use fish instead of meat, since we hardly ever cook fish over here. Since the fish over here is usually sold filleted and would crumble and disintegrate if thrown into a pot of curry and stirred about, I thought it would be better if we battered and fried the fish first, before putting it into the sauce. Even then, some of fish pieces still broke, but it would have been infinitely worse if we hadn't battered and fried them. We had to add quite a few things to the sauce before it was to our satisfaction, but in the end, it was pretty good. Sour, tangy, had a good kick and zero fishy taste or smell! Of course, as usual, I came up with the plan and Sab did all the work. Hey, I was baking remember? 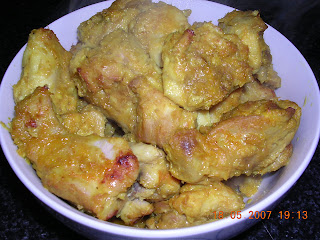 And just because I was uploading pictures of food that we'd cooked, here's a picture (right) of the Lemongrass Chicken that we made some weeks back.

PS: I realise that the pictures all look 'orangey' but my camera doesn't take very good photos indoors and I had to take all of those without the flash, otherwise the pictures would be too hideous to share.
Posted by t at 3:10 PM