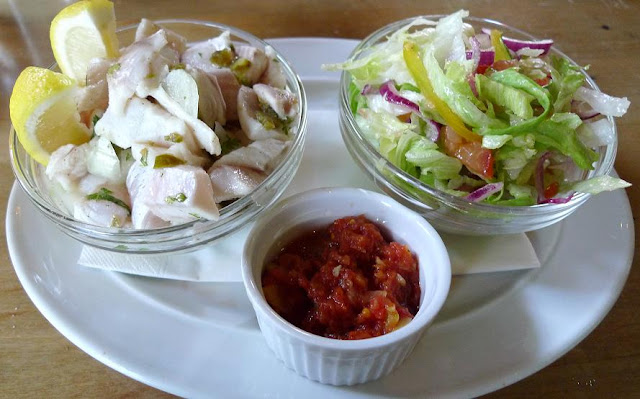 On M's recommendation, S and I visited the Mexican Café when we were Christchurch in March to see (dare I say it?) Cliff Richard. If M, who is American, a foodie and was once my very critical supervisor, thinks that the food at the Mexican Café is a decent representation of Mexican food, then it must be all right - I have to take his word for it because I haven't been anywhere near North America. The restaurant was charmingly rustic, and filled with bottles of alcohol - I am not kidding, the structural beams across the ceiling and the entire back wall of the bar were lined with bottles of alcohol of all shapes, colours and sizes (but unfortunately, I have no evidence of this as I stupidly did not take proper photos). The theme, decor and entire feel of the place just made you want to throw hands up in the air, toss your hair and scream 'PARRRRR-TAAAY' (and this was 5:30pm in the afternoon when there were only a few other patrons)!

S began squealing as soon as she spotted Ceviche (fresh fish cold cooked in a marinade of lemon juice, chillies and coriander) on the menu. I must admit, I too have always wanted to try Ceviche, so that became our starter and we loved it! It was beautifully clean and fresh tasting, tongue tingling-ly acidic, had an incredible 'zing', and was eye-widening-sit-up-straight-wake-you-up refreshing! I have never had anything like it before and it was a revelation. I think I speak for both of us when I say that we would probably jump on any excuse to go back to Christchurch just so we could have this again. 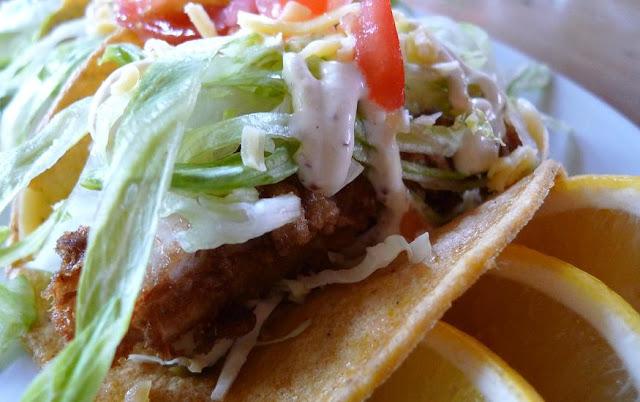 M told me that he had the Fish Taco and it was good, so that was what I ordered. While I appreciated the fact that it was light and clean tasting (i.e. fish and tacos weren't at all greasy), I felt that the flavours were just a tad too subtle. Maybe that's what it is supposed to be like, what do I know? Otherwise, everything else was executed perfectly and I would have been raving about it. S had the Chicken Flauta (pieces of chicken breast marinated with garlic, onion and olive oil then sautéed in Mexican Cafe salsa, wrapped in a flour tortilla with lettuce and tomato and topped with guacamole and sour cream and served with beans and rice) which, if I remember correctly, she quite enjoyed. The thing she couldn't stop gushing about was the beans that came with it. The first words out of her mouth after she tasted them were, "Mmmmm! So this is what beans are supposed to taste like! You have to taste this!". Luckily for her, I am impartial when it comes to beans, so she did not have to fight me off. I am sure I tasted the chicken as well, but nothing stands out in memory for me. S reports, however, that "it was well seasoned and did not taste like the Fish Taco, which is a good thing", meaning that at least not everything tasted the same, which is what you get at some places. 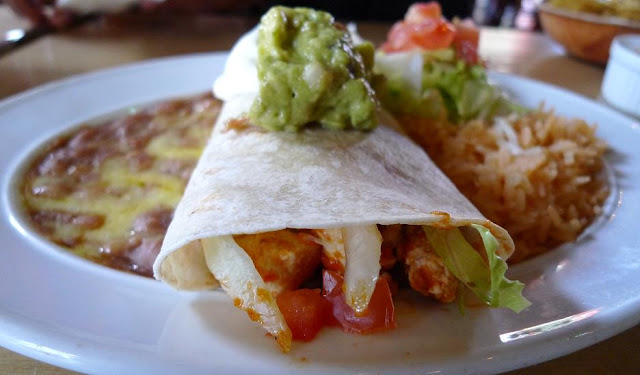 The verdict: The Ceviche carried the team. I would definitely go back for that, and to try some of the other items with bolder sounding flavours. S, when are we going on our next road trip?