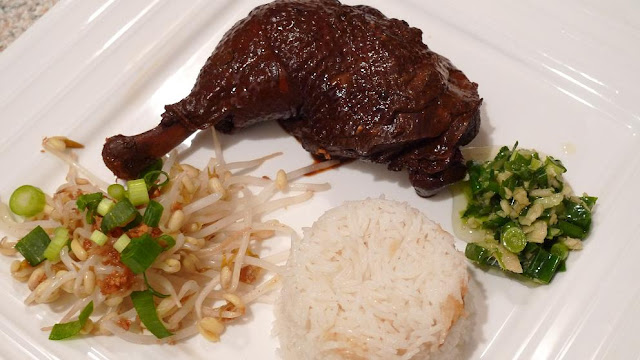 This Soy Sauce Chicken was made according to a recipe from Rasa Malaysia. It didn't turn out as well as we hoped - I was expecting it to taste more like my favourite Soy Sauce Chicken from Mei Wah (which I already have pictures of and will write about soon hopefully) but it actually tasted more like 'Tau Yew Bak' (soy sauce pork), except with chicken. I know there is little difference in the name, but in my opinion, Soy Sauce Chicken and Soy Sauce Pork (should) taste very different. 'Tau Yew Bak'/Soy Sauce Pork is heavily spiced with cinnamon and star anise and is sweet whereas the Soy Sauce Chicken that I love from Mei Wah is savoury and has a subtler soy flavour. This Soy Sauce Chicken turned out smelling like 'Tau Yew Bak' and was far darker than the Soy Sauce Chicken that I am used to. It was quite salty, yet also carried the sweetness of the star anise and cinnamon spices. It was edible, but I wasn't crazy about it and I won't be using this recipe again. I also didn't think that the (again quite salty) ginger and scallion dip was necessary since the chicken was very strong tasting as it was. Usually these garlic/ginger/scallion toppings complement the plain/mild tasting chicken in steamed/boiled chicken rice dishes.