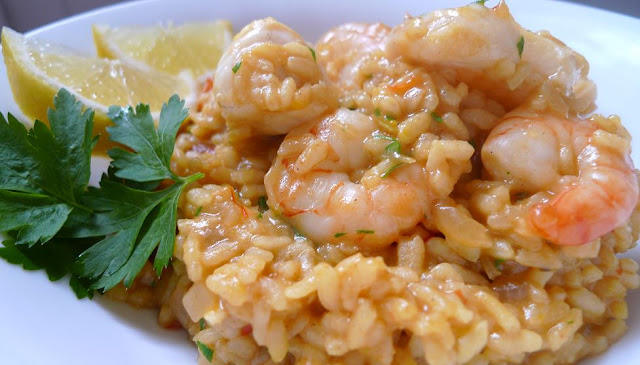 S and I both love watching Gordon Ramsay's F Word, Cookalong Live and Hell's Kitchen. He is entertaining, intense, doesn't mince words and best of all, his recipes are relatively straightforward. Between the two of us, we have tried quite a few of his recipes that have generally turned out well, but only managed to photograph a few. As luck would have it, one of the ones I photographed isn't one of his better recipes.

Maybe it was because we didn't use a 'paella/large enough frying pan'. Or maybe it was because we forgot to heat up the store bought vegetable stock before pouring it into the mix. Nevertheless, these oversights/omissions would have only addressed the moistness issue, not the taste. Gordon's Christmas Paella (as seen on Cookalong Live) wasn't inedible, but it was bland and rather wet and risotto-like. I didn't really mind that it wasn't as dry as a paella should be, but the lack of flavour was unacceptable and thoroughly disappointing. 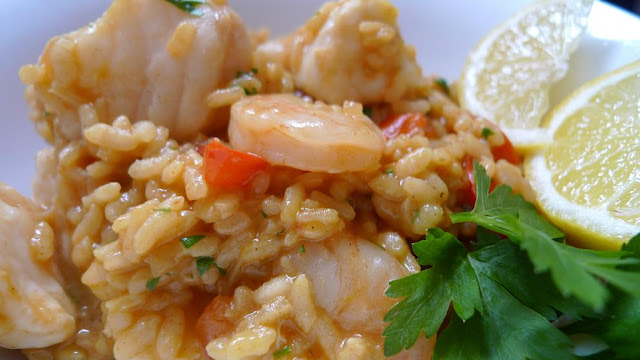 In retrospect, the dubious use of vegetable stock, rather than fish or seafood stock, in the recipe should have set off warning bells. Dissatisfied, I looked up meat paella recipes on the same website and found exactly the two missing things that I thought should have been in the recipe - in the meat paella recipe, the meat is cooked in the pan first, then the oil from the meat is used to flavour the paella rice and chicken stock is used. Therefore, to maximise the flavours of the seafood, I think Gordon's recipe should have had us searing an oily fish like salmon or cod, skin side down, in the pan first (or whole prawns, etc) and using hot fish or seafood stock.

We will definitely be making (or at least trying to make) paella again, since we love it and are on the hunt for a perfect recipe, and maybe next time, if we're in the mood for seafood paella, we will try Gordon's recipe again with our modifications. Otherwise, we will be testing this Chicken and Chorizo Paella recipe.

Anyway, we sat down with our bowls of paella and watched this episode of the F Word. By the end of the show, S was ready to try another recipe of Gordon's (from the show) to make up for the disappointing paella. To be continued...
Posted by t at 10:15 PM