Critic Issue 18
NB: If you're wondering what happened to issues 16-17, I had to use some of the material already posted on this blog and didn't want to repeat myself. I have/will post the new bits that were tacked on in those articles.

I’m a big fan of FoodWishes.com. Every recipe of Chef John’s that we’ve tried has turned out perfectly, and that is not something I can say about any of the current celebrity chefs. I’ve always wanted to have a typical ‘Southern’ meal, which to me, having been influenced by pop TV, equals fried chicken, cornbread and sweet potato pie. I have never been to the southern American states and have no idea whether any of this is actually ‘southern’, but regardless, this week's theme is (loosely) Southern food. Naturally we turned to our favourite authority on American food, and found a great ‘Buttermilk Fried Chicken’ recipe. The chicken turned out beautifully with a nice crispy, crunchy coating and deliciously tender, juicy, tasty flesh. It pays to invest in a proper thermometer to get the temperature of the oil right, but not critical if you make sure the oil is very hot before frying. We also made some corn bread, which was pretty good and really easy to make, and blanched green beans, for the full southern experience. All in all, it was a really good, satisfying meal, which is the ethos of Southern food (according to my TV). 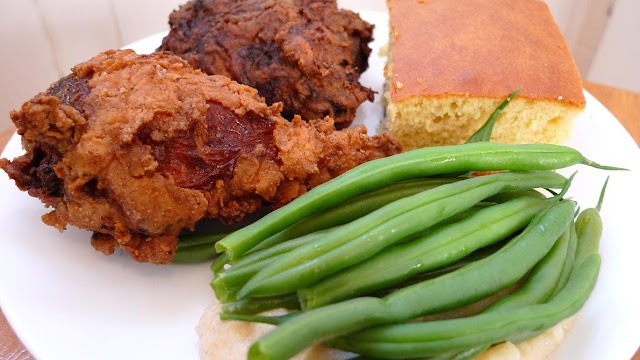 I know (or hope) you're thinking, "Where are the mashed potatoes?!!". We contemplated making stock standard mashed potatoes or trying our friend E's Parsnip and Cauliflower puree recipe, and ended up doing the latter (it's the bed that the green beans are on, in the picture). It didn't turn out as 'mashed-potato-like' as I would have liked (maybe we added too much water because the damn thing wouldn't blend properly) but it was a little too airy/watery for my liking. It had a nice garlicky flavour, but there was just no bite to it. I might be tempted to try this again (will adhere strictly to the recipe if I do try it again) if I get a flash blender sometime in the future.

If you're going to try making the corn bread, click on the link to the original recipe and read the comments from people who have tried this recipe. Most people prefer it a little sweeter (so add a bit more sugar) and some added a can of corn. We forgot to add more sugar this time around so it wasn't as good as the first time we made it. Also, if you leave it in the oven for too long, it will dry out, so don't.

Method
In a mixing bowl, combine flour, cornmeal, sugar, baking powder and salt. Add the milk, eggs and shortening; beat for 1 minute. Pour into a greased 9-in. square baking pan. Bake at 220˚C for 20-25 minutes or until bread is golden brown and tests done. 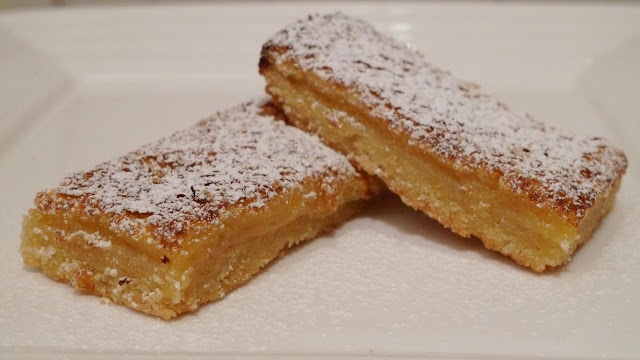 On a separate occasion, I had an insane craving for Lemon Bars after watching an episode of Las Vegas, where the chef made lemon bars. I had never tasted them before but I knew I had to have them, so I found the easiest recipe online and….got D and S to make them. Even though they were not exactly like I imagined they would be (I thought they would be more custardy) they were still very good – soft, sweet, satisfying, lemony filling with a nice chewy crust. This recipe is a keeper. 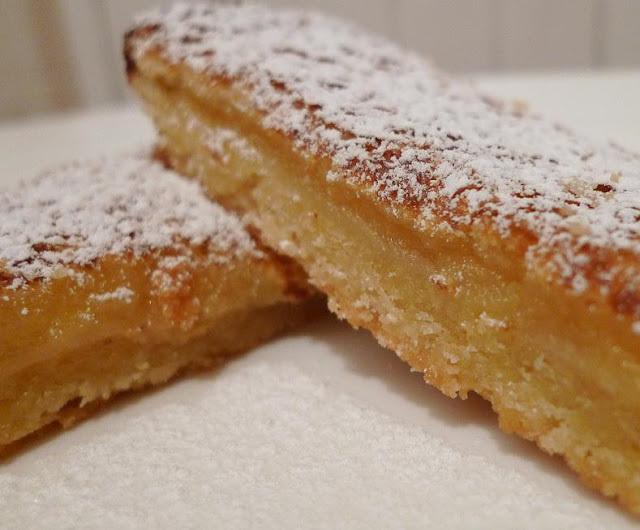 Method:
Preheat oven to 175˚C. Grease a 9x13 inch pan. In a medium bowl, stir together 2 cups flour and confectioners' sugar. Blend in the melted butter. Press into the bottom of the prepared pan. Bake in the preheated oven for 15 minutes, or until golden. In a large bowl, beat eggs until light. Combine the sugar, baking powder and 1/4 cup of flour so there will be no flour lumps. Stir the sugar mixture into the eggs. Finally, stir in the lemon juice. Pour over the prepared crust and return to the oven. Bake for an additional 30 minutes or until bars are set. Allow to cool completely before cutting into bars. Dust with icing sugar (optional).
Posted by t at 3:15 PM