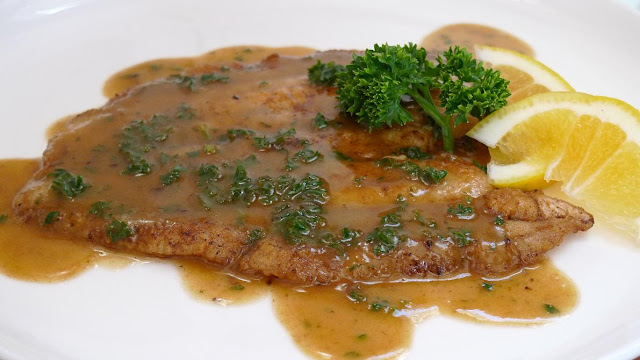 This post is for J.I., a very kind reader who, upon reading about my obsession with some of the food in the movie Julie and Julia in Critic (pg 33, or here), sent me his copy of Mastering the Art of French Cooking. Thanks J.I.! Even though we still haven't tried anything from the definitive, preeminent cookbook (Boeuf Bourguignon is first on the list!), Sole Meunière should suffice as a tribute, temporarily. This was apparently the 'life changing' dish that Julia Child had in Paris that ignited her love for French food and cooking. And I can see why.

The Sole Meunière was wonderfully zesty and acidic and had a lovely, smooth, very subtle buttery flavour. It was not in the least bit sickeningly rich or greasy, as one might reasonably expect in dish with this amount of butter. The edges of the sole were nice and crispy and each bite of delicate, tangy sauce coated sole flesh melted in my mouth with an immediate rush of clean, slightly tart but still rich, full, flavours. Bliss! It's one of those dishes that does not immediately 'knock your socks off', but tastes better and better with each mouthful. Towards the end, in butter induced euphoria, I almost believed that it was the best fish that I had ever tasted. I can't wait to make this again.

We, naughtily, did not use Julia Child's Brown Butter recipe because we couldn't be bothered clarifying the butter, so we used this recipe instead. Below is my simplified version, of an already very simple recipe: